Here we are in 2011 and the first acquisitions have already arrived for the year.  Of considerable significance is the coming to light of the East Pukekohe Board of Managers Minute Book 1861 to 1895.  Pukekohe East Presbyterian Church, now owned by a local trust, has a special place in the history of the 1863 Waikato Land Wars between the Maori  and the British and New Zealand Governments. The small church became the centre of a battle where a stockade was built and occupied as a garrison-house by the locals. 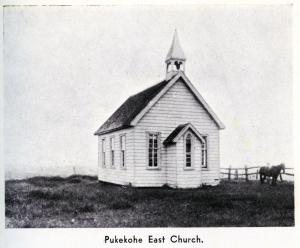 According to the introduction at the front of the record, the district was first visited by the Rev. Thomas Norrie on 1 June 1857 with the hope a church would be established as the district was showing promise with increased population and land purchase.  The hopeful sales did not come to fruition and the ‘best settlers’ left the district   However the Rev. Thomas Norrie organised services in the home of James Dearness;  an arrangement that continued until 15 July 1860 when formal arrangements to develop a Presbyterian parish began.

The first minute recorded is the formation of a building committee in August 1861 which delayed an immediate erection of a church due to the ‘unsettled state of the country’.  Tenders were eventually called for in February 1863 and the tender by James Dearness  for £70 including a belfry was accepted.  The Church was duly opened with ‘suitable discourses by the Rev.  Mackey and the Wesleyan, Rev. J. Buttle’,  on 6 April 1863,  followed by a soiree when 81 people attended despite the ‘severity of the weather’.  In true Presbyterian fashion the Minutes note their satisfaction with the ‘proceeds’ of £18 given towards the building costs.

By June 1863 the cemetery had been laid out and property fenced.  The next entry, probably recorded later has the sobering note in the margin   “Pukekohe battle with the Maori”.

“The building thus erected as a temple of peace was soon changed into a citadel of war and was the theatre of a severe battle with native rebels.  In this engagement it has suffered severly (sic), but your Committee rejoice that with the pallisading (sic) and then defensive works it rendered then and has still rendered important service in the defence of the district and has contributed more service than the Committee contemplated to advance the possible good.”

“The Church which was built in troubled times will require to be thoroughly repaired, or even rebuilt when hostilities shall cease…”

Not until December 1864, when the families had returned from Auckland did they feel it was safe enough to consider repairing the Church.  Reports suggest that the building was ‘riddled with bullets’ and the Minutes noted a throrough cleaning should be undertaken.    A claim for costs of the repair  was lodged with the Government in February 1865.  Discussion on whom would repair the Church appeared to create some tension.  Finally in January 1866  authority was given to place an order for timber and the work begun including  re-fencing  and a ‘three foot deep ditch’  dug around the boundary. W.J. Comrie notes in his history of Auckland Presbytery that bullet marks may still be seen in the upper part of the building’ and the line of the trench is evident outside.

No further mention is made of receiving assistance from the Government, a full detail of the damage or the completion of the repairs.

Some 66 years later on 1 December 1929,  a large stone, which had lain close to the church inside the stockade was used as a memorial to mark the grave of  Maori who lost their lives.  They had been buried in a gully further on from the Church while  the European soldiers were buried in the Church cemetery.  The inscription on the Memorial Stones  reads:

In memory of Maoris

who lost their lives in the

A plaque placed inside the Church reads:

“To the Glory of God

And in memory of the Settlers and others,

wh0 defended this Church during the attacks by Maoris

“To unveil these memorials Sir Charles and Lady Alice Ferguson visited the Church.  A Guard of Honour was formed by Maori boys from Wesley College, and the grounds were thronged with interested visitors …prominent among them was Capt. Joseph Corbett Scott, a defender in 1863, also Mr. Skinner, who was a Corporal in the Militia Riflemen who came to the relief of the attacked.” 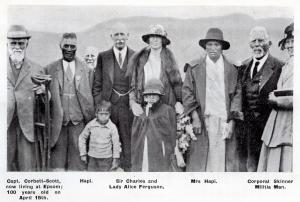