A Further Message from the Rev. Geoff King, Christchurch 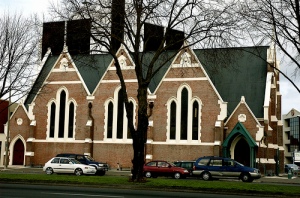 I’m just back from another bike ride through the streets of Christchurch, after a night in which no one in our region has got much sleep.  Following seven aftershocks between midnight and dawn, several of which were of a magnitude greater than 5 on the Richter scale, the prospect of emigration is becoming quite appealing as even the slightest apparent movement of the earth is beginning to make me nervous…this has been much worse than anything I can remember from my childhood in Hawke’s Bay.  However there’s really no time for dreaming about moving to Australia as there’s so much to be done here, and it’s heartening to see people supporting one another as well as they can.  Because schools are closed until tomorrow many of us are balancing child-minding with other responsibilities – my two sons aged 10 and 8 have been amazingly patient, spending a good couple of hours in the relative safety of the Knox carpark yesterday while I met with engineers to determine the fate of our church.  The top of the Victoria St façade was lying on the pavement this morning, with the Celtic cross that had survived the main quake now in two parts – quite a poignant sight.  I’m not sure whether the demolition team had started really early, or whether it fell during one of those aftershocks;  my wife suggested I could have picked it up and brought it home before someone takes it as a souvenir, but there is a limit to what can be carried by a skinny middle-aged man on a bike!  Amazingly the stained glass window depicting the rivers and plains of Canterbury is still intact and overlooking the desolation…my heart really goes out to the business owners and tenants of the properties now lying in rubble on the other side of Victoria St.  But the purpose of this email is not to tell you about buildings;  rather I want to thank you for your supportive emails, phone calls and prayers which mean so much to us here.  I know many would like to be able to do more, but the reality of the situation is that it’s going to take time for the civil authorities to re-establish amenities, assess damages etc, and in the interim it’s up to neighbourhoods and community groups such as our churches to support one another as well as we can.  I was really moved when, in response to a facebook message I sent to our youth group apologizing for cancelling our meeting on Sunday evening, one of our young men suggested the youth group could volunteer for some community work in the areas most affected by the quake at our next meeting – no doubt you’ve seen images of the silt deposits left by liquefaction in Burwood, Dallington, Avonside and Kaiapoi.  I was also grateful to receive offers from several inner-city and neighbouring colleagues to host our temporarily homeless congregation this Sunday and until such time as we can return to our facilities and resume the use of our hall.  In the meantime, we’ll do our best to do what the Church at its best has always done:  care for and support one another and all who are in need, often simply by listening being alongside. I am reminded yet again of those famous words attributed to Dietrich Bonhoeffer:  that at times like this, only a suffering God can help.

Sincere thanks for your encouragement and prayerful support of us here.