Knox Church Congregation Return to their Church Building for Worship

Our guest writer on this occasion is the Rev. Dr. John Roxborogh and he shares with us a visit to Knox Church Christchurch on May 1st.   John also is the photographer and you can view other photos he took of his visit to Knox Church.  They are most symbolic and poignant and bring forward many Questions about the place of Church in our community.  thanks John. 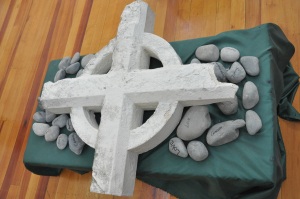 Sunday 1 May was the first time Knox Church in Bealey Ave Christchurch had been back in its worship space in the Knox Centre since the February earthquake. Jenny and I were in Christchurch for the Ecumenical Institute of Distance Theological Studies’ graduation at St Mary’s Merivale.  I guess like others we felt torn between being voyeurs of the damage and wanting to somehow be part of returning normality. Knox’s wooden arches like a ruined medieval abbey had been on occasional backdrop for television. I had heard about Geoff King getting around on his bicycle to see people. Looking around while we there and getting to church seemed important things to do. 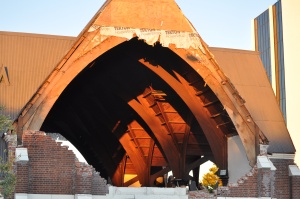 They say you know you are in Christchurch when you are told what it is like to wake up in one suburb, shower in another, and go the loo wherever you can. When there is an aftershock people check their cell phones to see if they got the magnitude right. A morning shake in the motel helped make the connection.  There was generosity and humour and just the occasional sign of raw nerves. The open malls were crowded. Going to Lyttleton on Saturday night it seemed as if everything was closed down, but eating out at the Fisherman’s Wharf overlooking the harbour seemed a celebration. 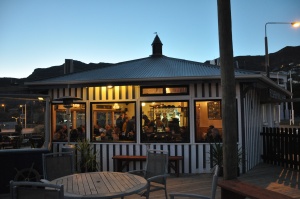 As for many Christchurch churches, worship in a smaller space gave a sense of intimacy. Materials, including the baptismal font, rescued from the old church were notes of continuity. So of course were people pleased to see each other and sharing stories. Clean up teams had been busy. Processes for working through options for the future were in hand. An amazing floral arrangement at the door linked rubble to the resurrection. The reading from John’s Gospel with its sense of the importance of signs – things pointing beyond themselves to other realities – gained another level of relevance. 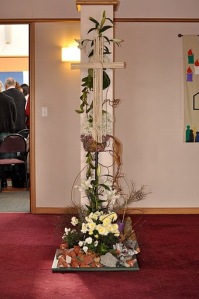 Geoff King’s evacuation information was no routine formality. It included explanations about cracks and dips in the ceiling and directions to go if the neighbouring building started to totter towards us. The story of Thomas’ questions and Jesus appearing through walls also connected. In the rough justice of a civil emergency rooms in the Knox Centre had been broken into to check for fatalities. 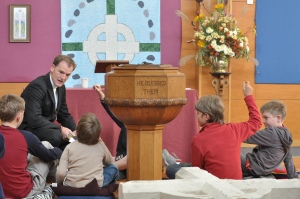 A lively children’s talk and the joy of a baptism would have been encouraging on any day, but also pointed to life going on and God still being with us. This was more than wishful thinking. 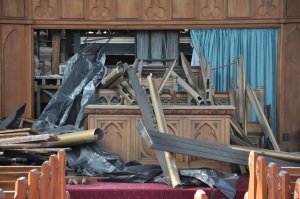 The organ in the church had its pipes scattered over the communion table, but the music group was back in action and the piano playing touched notes which echoed and lifted feelings hard to put into words. After coffee and chocolate cake, another gift from Knox was a daffodil bulb to take home for planting as a sign of life, faith and hope in the future. 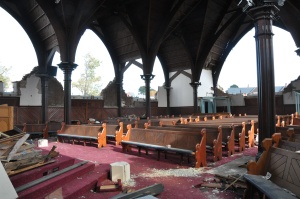