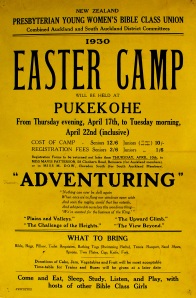 Two fascinating oversized exercise/scrap books came to light last week which brought back many Easter memories from my teenage years.  Easter Camp was a central activity for the Presbyterian Bible Class Movement from its beginnings in 1896.  Each year thousands of young people congregated in numerous, often obscure sites around the country, where we lived in tents, small huts, large halls, under show ground grandstands and school class rooms.  We arrived in a high state of excitement dismounting from hired buses, trains, farm drays, motorbikes and old cars.  Laden with bags of all shapes and sizes, blankets (sleeping bags were yet affordable items for the non-experienced camper) pillows and above all hot water bottles – it was always cold, we sought out the registration table.

The immense organisation that went into these camps, which these two acquisitions reveal, had us all well accounted for from being allocated study groups, sleeping space, activity & sport groups, fatigue groups to undertake chores such as dinner preparation, ablution duties, and dish washing.  Overseen by a Camp Mum (not the Topp Twin variety) and Camp Dad, numerous adults and Bible Class Officers we arrived determined to have the time of our lives.

Preparing our sleeping arrangements was something to observe! Palliasses often needed filling with straw, it was during these years that I discovered hayfever, although described most commonly then as a head cold.  Sleeping head to tail around the space, divided by our bags, we managed to find places to have our treasured items handy and especially obvious-our Bibles, that was one of the main reasons for attending in-all said-and-done. Inspections occurred daily and became part of the competition regime that existed to entice this mad group of adolescence to behave and be ordered in all things.  Fits into Presbyterian ethos I realise!

The first meal was equivalent to a hot dog in today’s language; a saveloy or sausage and bread with tomato sauce. Cocoaand cookies for supper was very welcome especially when cold and drunk in front of a large fire.

The devotional life at camp was always a challenge, devotions in the morning and evening, study groups often twice a day, and a formal service. Any attempt to excuse oneself met with a considerable amount of disbelief and encouragement to leave your problem with God.  Each year a minister was chosen to write a study that was used throughout the country.  The leaders of the groups  met for many weeks prior to Camp so they would be well prepared to nurture through the enthusiastic and the uninterested in making a decision to be followers of Jesus.

Drama and music activities were always fun which often led to an inspired contribution for that infamous and generally hilarious concert towards the end of the Camp. One of my memories was being part of the ‘Looney Girls’ Choir’ where we sang advertisements intercepted with a chorus “One, two; three persil for me”.

Many pranks confronted us.  I recall one occasion when an old Austin 8 or similar red and black vehicle named ‘Monica’ was planted in the girls’ sleeping quarters and covered in our night attire.  What mayhem sorting it all out.

The end of the Camp came all too soon.  Many new friends were made some would last a life time.  Many decisions were made both privately and publicly, some we maintained others were soon forgotten but in all we wearily packed our bags and with considerable satisfaction headed home to wait for the next years Camp.

Thank you Elizabeth Robinson for holding  onto these wonderful scrapbooks covering Camps in the Auckland region from 1929 to 1940, they are treasures, and thank you St. James Auckland for forwarding them on.

By Yvonne whose camping memories date her to the mid 1950s!