The suburb of North East Valley in Dunedin is defined by North Road with streets of housing radiating out from it. It was once the main road to satellite towns north of the city. Now Highway 1 bypasses the suburb completely. Even so North Road is a busy street in a suburb that maintains its own identity with old family homes, a diversity of townships, and student flats. Two schools at each end of the Valley provide the educational centres of the suburb. Nearly all of New Zealand denominations are represented on North Road, in order going south: Baptist, Presbyterian, Anglican, Pacific Island Presbyterian, Methodist, Roman Catholic, Salvation Army. Two other Presbyterian churches are sited in the hill suburbs on either side of the valley. This creates a natural route for the annual inter-denominational initiative the Good Friday Procession of the Cross, ending with meditations and worship in the lower Botanic Gardens just beyond the south end of the suburb in the Dunedin City green belt. In 2007 the churches also worked together to provide art for Easter meditations at the churches along the Valley. The photographs of this installation were taken by the Rev. Dr Susan Jones during her ministry at one of the Presbyterian churches of the North End.

The Last Supper was set up by Meegan and Alan Cloughley at Ross Home, the Presbyterian Support Retirement Home in North East Valley.  Thirteen masks were carefully strung up around a table to represent the last supper.  If you look carefully one of the masks is reversed.  The installation was set up in a courtyard within the main building of the site and could be viewed on all four sides.

The Procession cross used in a display in the garden at theValley Baptist Church.  Each Good Friday the cross is carried from theBaptistChurchto the Botanic Gardens as part of the Procession of the Cross. 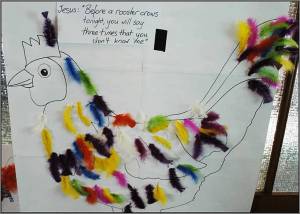 “Jesus: Before a rooster crows tonight, you will say three times that you don’t know me”.  Prepared by the children of Valley Baptist Church 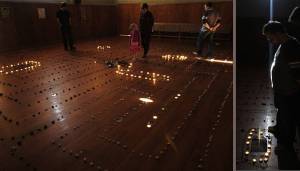 Detail of crown of thorns at St David’s Presbyterian Church, The Blue Lagoon. 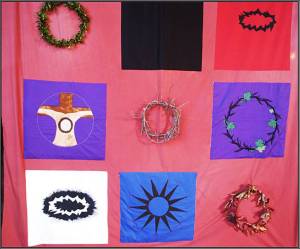 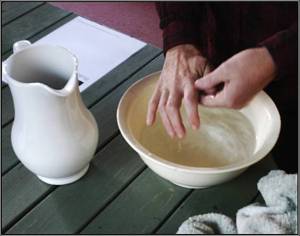 The rite of hand washing at The Blue Lagoon. 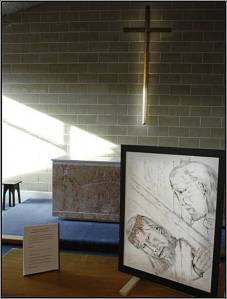 Illustration, Simon of Cyrene carries the cross, on display before the Altar at St Martin’s Anglican Church.

Mary below the image of the crucified Jesus in Sacred Heart Hall.

Cross and candles at Nga Maara Hall, Sacred Heart Catholic School, prepared by the children of the school. 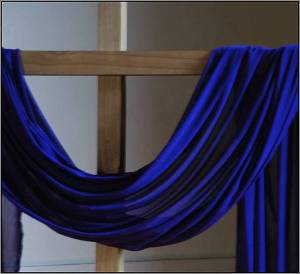 Detail of the cloth on the cross at Nga Maara Hall.

“The light shines in the darkness, but the darkness has not understood it”    Detail of display at Salvation Army Hall.