An ANZAC sermon preached by the  V. Rev. Robert (Bob) George McDowall in 1947 reflects a deep intensity of feeling that speaks of the costly sacrifice and the inevitability of death that surrounds those at war.

I see the graves of these men in the desert, singly and in little groups, or where they have been collected later.  I see them in Palestine, in Italy, in Germany, in England. They are to be found in almost every land and in the islands of the sea.  Some have no known resting place.  They died alone, or were disintegrated or are buried in the great deep.  In these northern lands the lovely wild flowers will be blooming now, the anemone will be nodding their heads in the wind in Palestine and Greece, and lilies will be showing through the sands in the desert.  Perhaps here and there some one will pick them and pay tribute to the fallen.

…They gave the most priceless possession a man has, the thing he cannot take again, his life.  We remember them with grateful hearts.

He considers the importance to recall and remember ANZAC but not for sacrifice sake but as a reminder of the responsibilities that are a consequence of sacrifice – freedom and the resultant privileges it brings.

…It is good to remember because to do so recalls us to a due sense of the worth of what we enjoy.  Memory links past and present, blends the two, and gives deeper significance to what it is, as its connection with what went before is more clearly seen…There isn’t a single thing in our common life of value that has not been paid for a thousand times in blood and toil and tear, and not least the freedom of worship, and the faith in which we are nurtured.

…If we misuse the freedom and the privileges which have been fought for us at the cost of the life and suffering we make a mockery of our acts of remembrance…It is our duty to see to it that we do not squander our dearly fought heritage.

Bob McDowall knew all about death, sacrifice, the brutality of war, loneliness, depravation, temptation, the deteriorating nature of human kind, comradeship but above all he was alert to a deeply held response to his call to minister and offer hope to his fellow soldiers. 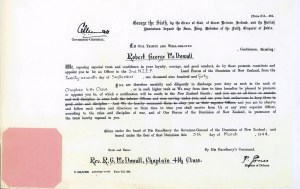 A Presbyterian Military Padre, he arrived in Egypt 30 January 1941 and was attached to Maadi Base as Chaplain Major to the NZ 7th Anti-tank unit where he remained until November 1941.  Early in December the German army overtook the Medical Dressing Station where he had been assisting and they moved the fit and walking wounded as Prisoners of War.

Although the possibility that the British would free the Medical Dressing Station within days McDowall who was deeply committed to his role and duty as a Chaplain voluntarily offered to travel with the POW’s. ‘McDowall steps voluntarily where God calls him to step – into imprisonment’.  He remained a POW until the end of the War, first in Italy and then in Germany.

The final section of his ANZAC sermon highlights his total commitment as a pastor to guide the soldiers and those who were in attendance this ANZAC day in 1947 to identify the presence of Christ in the midst of remembrance.

Above the graves of our soldiers stands a cross because Christ Jesus our Lord, the son of God, whom here we worship, by his death has made the cross forever the symbol of self sacrifice, and by his resurrection has made it the emblem of hope.  If we look with seeing eyes, we shall discern among the crosses the shining figure of our Lord… he stands ever in the midst of our life. Without him it is meaningless and vain…Only when we give him his true place will we fulfil worthily the duty we owe to those whom we remember today.